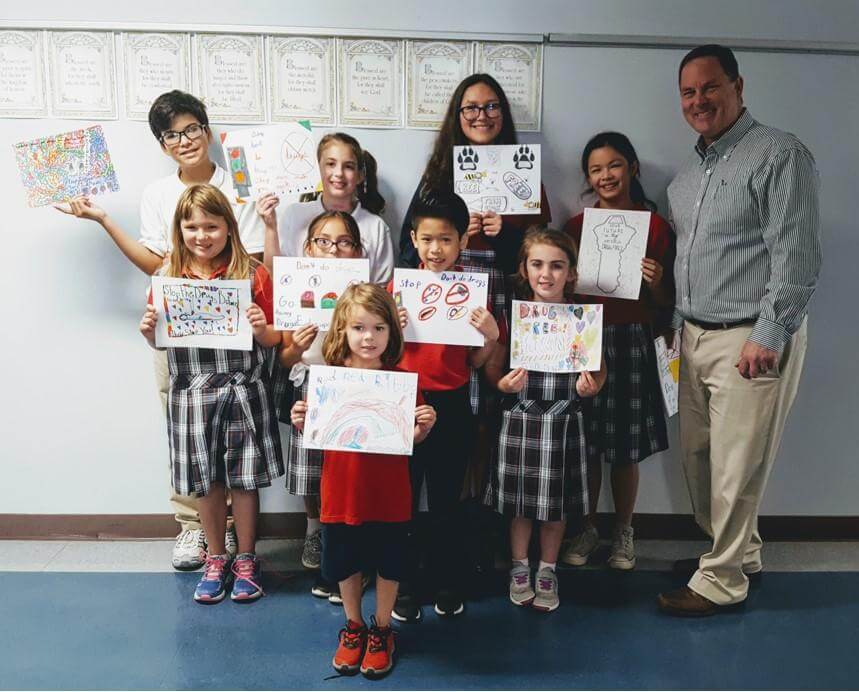 The main purpose of Our Lady of Fatima Catholic School is to provide quality education through academic excellence, Catholic principles, and Christian values. Each student is guided toward scholastic achievement and self-discipline, rooted in the love of God and neighbor. . . nurtured in an atmosphere of faith and loving concern.

For over 50 years, residents of Benton, Bryant and surrounding communities have looked to Our Lady of Fatima Catholic School to provide outstanding academic programs – combined with Christian principles – for an  unparalled educational experience. Founded in 1959 by the Olivetan Benedictine  Sisters, Our Lady of Fatima Catholic is dedicated to offering the highest quality  academic curriculum, integrated with discipline, citizenship, religious truths, and
traditional values.

Construction of Notre Dame School began in April 1957 and was  completed the following year. Much effort was expended in the building and  staffing of the parish school. While fulfillment of the physical requirements for  Notre Dame offered no great difficulties, acquiring a teaching staff proved no  simple matter. Father McGinnis personally spent a great deal of his seemingly
fruitless endeavors as an indication of the Church’s great need for religious  vocations. He expressed the sentiment that all his efforts would not be in vain,  even if the school stood idle, if parents could be awakened to the need to  encourage vocations to the religious life in their children.  Father’s travels on behalf of the school took him over a wide area. In search of even two nuns, Father visited mother houses  in Dubuque, Clinton, and Ottumwa, Iowa; in Kankakee and Wilmette, Illinois; and in St. Louis, Missouri. Prior to that he had visited many  other areas of the United States in his quest. Further afield, he had even gone to a mother house in Ireland, without success.  As late as mid-August of 1959, it was only at the last moment that Reverend Mother M. Phillippa, O.S.B. of the Olivetan Benedictine Sisters of Holy Angels Convent in Jonesboro, assigned Sister M. Alberta Krebs, O.S.B. and Sister M. Laura Schneider,  O.S.B.to teach at Notre Dame School. His prayers and those of his congregation had at last been answered. The school opened for the  first four grades in the fall of 1959 with an enrollment of 39 students. Two-and-a-half years later, the school was officially blessed and  dedicated by Bishop Fletcher on Sunday, January 22, 1961 at 2:30 PM. By this time, a fifth grade had been added to the original four.

In 1961, with an additional teacher, grades 6,7, and 8 were added to the school.  On October 30, 1980, the school’s name was changed from Notre Dame to Our Lady of Fatima, at the request of Father John  Janesko. In January of 1984, at the suggestion of Sister Henrietta Hockle, Diocesan Superintendent, a local school board was formed.   In June of 1984, the board deceided to add a kindergarten. Sister Mary Anne Nuce, new principal, worked closely with the pastor Father  Janesko, the board, and parents in implementing the kindergarten.   With the addition of the upper grades, parents and students asked that some type of sports’ program be established. Our Lady of Fatima joined with other Catholic schools in the Little Rock area to play in the Little Rock Parochial League in basketball. After a  popular vote by students, the mascots Knights and Lady Knights were chosen for Our Lady of Fatima School to be carried out in the  colors of purple and gold.

In 1995, Sister Mary Anne Nuce returned to Holy Angels Convent in Jonesboro, so this year saw the office of the principal shift from the religious to lay leadership. Mrs. Marguerite Olberts became the first lay-principal of Our Lady of Fatima School.  The school was moved into the new parish educational facility in the fall of 1996. Bishop Andrew J. McDonald came to the parish
in September 1996 to say Mass and dedicate and bless the new school. Former Pastor Jim Mancini was present, along with parish priest  Rev. John Marconi. The original school building would now house a growing day-care program.  To improve educational opportunities for the students of Our Lady of Fatima, the library was expanded and a computer lab was set up in the parish hall, adjacent to the school. Art, music, and physical education programs were added to the school, as well as the  departmentalization of classes in grades six through eight.

In the spring of 1998, the Olivetan Benedictine Sisters of Jonesboro were finding it more and more difficult to staff the school,  so on May 17, 1998, Our Lady of Fatima said good bye to the sisters at a celebration honoring the sisters. At this time, an angel and  plaque were placed in front of the school in honor of the years of service provided by the Benedictine Sisters of Holy Angels Convent.

Work was begun by Bartlett Architecture to renovate the Parish Hall and Gym facility. The facility now houses a Parish Center, meeting rooms, and an enlarged cafeteria and kitchen facility, along with a computer lab and full school library.